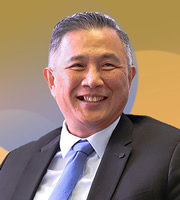 ‘Of course I’m proud and happy. It didn’t come as a big surprise, though. I know the progress we’ve been making, and the trajectory is continuing.’ In buoyant spirits after attending a conference in France, Irwin King comments on the recent good performance of computer science and engineering—first in Hong Kong and 26th globally—in the QS World University Rankings. Rankings don’t change overnight, he says.

The veteran computer scientist’s life is a series of coming full circle. As a high-schooler, King marvelled at Los Angeles’s profound, starry night sky and resolved to fathom the mysteries of the universe. His aspiration, however, was of a more insinuating kind, and more quixotic, as it is the universe in our head that he finds most enthralling. More intriguingly still, it can be replicated. After teaching a computer to play tic-tac-toe, he lost whenever he made a wrong move. ‘With loaded instructions, it would act as if it had intelligence. When the Apple Macintosh came out in 1984, I saw the potential of computers eventually merging with human intelligence. I want to study the human brain, and how we may simulate that in computers,’ says King.

The quest for intelligence sent him on a journey in artificial intelligence and machine learning, lasting more than three decades. His coming to Hong Kong, likewise, was marked by a wish to serve and return to his greater China roots. His parents came from China, while King was born in Taiwan and raised in the US. Joining CUHK in 1993, he belongs to the first batch of scholars hired by the University to re-fashion itself from a teaching into a research university.

The computer revolution
Thanks to the rise in computational power, proofs and theorems pencilled on paper in days of yore have been turned into reality. Both at King’s alma mater—the California Institute of Technology and CUHK, computer science has its roots in mathematics department. Now it has established itself as a full-fledged discipline, becoming ever more sprawling and interconnected with different subjects.

‘One controversial point is, will computers and AI surpass humans?’ I ask.

King admits computers outperform humans in some aspects: they see multiple spectra, and they make better drivers. However, whether they are above perceptual tasks and can have that integrity and spontaneity we possess, though, is open to debate.

‘In terms of the higher-order functions of human intelligence, for example, consciousness, attention, creativity, emotion, imagination and intuition, do they have that? Even that concept of id—does a computer actually recognise, I exist? Can it think for itself and formulate policy that is ethical with imagination and passion?

‘One direction of computer science, really, is to understand these higher-level functionalities, to bring about that quantum leap from precise algorithms to consciousness.’

Google search is not free
Machine learning for social computing and recommender systems is what King specialises in. Social computing, aka computational social science, gains insight into how humans interact through analysing social phenomena using the computer. For example, the famous six degrees of separation theory results from social computing. And there is no need to be flummoxed by recommender systems: the Google search results and ads are some of the recommendations they generate, as they adapt to a user’s behaviour and personalise the results.

‘“Google knows you better than you know yourself”—if I look at your search history, then I can pretty much know what you do, what you like, and who you are.’

‘Doesn’t that make one feel transparent? It is manipulative; what we see is only presented to us, not what we should know,’ I ask, incredulous.

‘Nowadays, we are plagued by information saturation—we have too much information. We need to have recommendation, which filters out millions of hits to give you what you need. Search is becoming recommendation,’ King explains.

But privacy matters. ‘Yes. There is always a tension between privacy and efficiency. At the end of the day, it’s how much you are willing to give up to use the “free” service,’ King, whose digital life accepts no cookies, accents the word ‘free’ with an obvious touch of irony, grinning as if some secret were known.

‘Service is not free: you are giving up your privacy for some kind of service. You tell Google something about yourself and it gives you access. In return, it collects information from you.’

‘In terms of research, there is no finish line,’ says King. ‘The universe is that big; we’ve only explored a tiny part of it. Part of my dream is to understand the brain; I think I’m better than 30 years ago when I started, but we don’t know what intelligence is, don’t know how to build that system, and aren’t thoroughly clear about the ethical implications.

‘As a researcher, I am probably at my last stage. I will probably leave rigorous research to others, but there could be maturity and wisdom that I could give to the next generation,’ says he.

At the beginning of our chat, King encapsulates his reflections on education in a line by 20th century Irish poet William Butler Yeats: education is not the filling of a pale, but the lighting of a fire. In an age that craves knowledge hoarding and quick fixes, the spark of passion may bring us back to the simple happiness and raison d’etre of learning and being human. In Yeats’s other poem ‘Sailing to Byzantium’, wearied of his flesh and blood envelope, the aged speaker hopes to become ‘an artifice of eternity’, where, as an all-knowing, prophetic bird, he may sing immortal songs. Whether King and his peers’ creations will truly be monuments of unageing intellect remains to be seen. But the veteran educator is sure to continue singing his songs of passion, imparting what is past, passing, or to come.