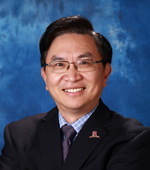 Professor Michael R. Lyu, Professor of the Faculty of Engineering at The Chinese University of Hong Kong (CUHK) has received the 13th Guanghua Engineering Science and Technology Award from the Chinese Academy of Engineering (CAE), for his outstanding contribution to the theory and applications of software reliability engineering. Established in 1996, this biennial award is presented as a state engineering award and selected by nine academic subsidiaries of CAE and review committees from Hong Kong, Macau and Taiwan to recognise Chinese engineers and scientists who have made outstanding achievements and significant contributions to engineering science and technology, as well as engineering management. This year, 41 scientists have been named awardees, among the 296 eligible candidates, following stringent review.

“It is a great honor to receive this award and I would like to extend my heartfelt thanks to the Hong Kong Academy of Engineering Sciences and CUHK for their support. My special thanks go to my colleagues and family for their unending inspiration and encouragement all along my career path,” said Professor Lyu. “I have been carrying out engineering teaching and research at CUHK for over two decades. This award not only serves as a recognition of the effort that my team has made, but also demonstrates the very best of the research environment in the University. I sincerely hope that the University will continue to promote technology’s advancement and serve society through teaching and research.”

Professor Lyu has been keen on technology transfer. He further actively promoted the techniques he proposed to industrial projects, including telecommunication systems, local area networks, Web services, cloud computing platforms, and smart phones. His solutions to the problems of software reliability modelling, estimation, measurement, and analytics achieved breakthrough results in the field.

In recent years, Professor Lyu’s contribution has earned him a second-class award in Higher Education Outstanding Scientific Research Output Awards (Science and Technology) from the Ministry of Education (MoE), and an Overseas Outstanding Contributions Award from the China Computer Federation (CCF). He also made three appearances in the AI 2000 Most Influential Scholars Annual List. He has participated in more than 30 industrial projects and helped to develop many commercial systems and software tools. He has published over 550 refereed journals and conference papers in his research areas and received more than 37,000 citations (H-index 93). He is the only scholar in the world holding four prestigious international honours at the same time, namely Fellow of The Association for Computing Machinery (ACM), Fellow of the Institute of Electrical and Electronics Engineers (IEEE), Fellow of the American Association for the Advancement of Science (AAAS), and IEEE Reliability Society Engineer of the Year 2010.