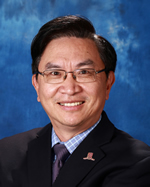 Dr. Michael Rung-Tsong Lyu, a Professor of the Department of Computer Science and Engineering, The Chinese University of Hong Kong (CUHK), has been elected Fellow by The Association for Computing Machinery (ACM) – an authoritative international engineering organization – for his remarkable contributions to the theory and practice of software reliability engineering.  For the Year of 2015, 42 are named ACM Fellows worldwide and Dr. Lyu is the only one from Hong Kong.  ACM fellowship is the organization’s most prestigious membership grade which only the top 1% of its members fulfills the strict criteria to receive.

Dr. Lyu is an international expert in the area of software reliability engineering and software fault tolerance.  His research interests lie in software engineering, dependable computing, distributed systems, cloud computing, services computing, big data analytics, and machine learning. He has participated in more than 30 industrial projects in these areas, and helped to develop many commercial systems and software tools.  In addition, Dr. Lyu has published over 480 refereed journal and conference papers in his research areas. He also co-edited two books on software reliability, which have received enthusiastic responses from both academia and industry. Dr. Lyu was elected Fellow of the Institute of Electrical and Electronics Engineers (IEEE) in 2004 and Fellow of the American Association for the Advancement of Science (AAAS) in 2007. He was also named Croucher Senior Research Fellow in 2008 and IEEE Reliability Society Engineer of the Year in 2010.