The project “Salinity in the Macau Raw Water Controlling System” by Mr. Choi Chiu Wo Jeff, received a Certificated of Merit in the 7th IT Excellence Awards (Post-Secondary). The event was organized annually by the Hong Kong Computer Society on 19 October 2005. Mr Choi, a Ph.D. Student of the Department was supervised by Prof. Lee Ho Man Jimmy.

During the winter dry season of each year, the water level of the river streams is low due to lack of rainfall. Seawater can thus intrude into the river system, causing high salinity level in the water. Care must then be taken to control the opening of pumps at the water supply source and the transfer of water between reservoirs to minimize the saltiness of the water supplied to the general public. The project employs artificial intelligence techniques in the design and development of an optimization engine to help the water department of a Chinese city (name withheld) government tackle the salinity crisis. The project was regarded by judges as a good example of how information technology can solve immediate practical problems. 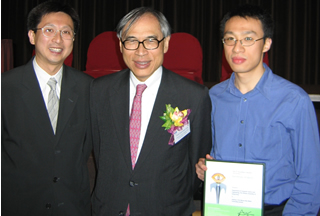