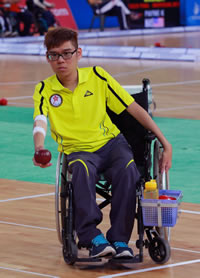 Wong Kwan Hang, an alumnus of Department of Computer Science and Engineering, and his teammates won a silver medal for Hong Kong in the mixed pair boccia BC4 event at the Tokyo Paralympic Games today.

Professor Rocky S. Tuan, Vice-Chancelllor and President of CUHK congratulated him on winning the silver medal, “Kwan Hang has made impressive achievements through his determination and perseverance. The University is excited and proud of Kwan Hang, who has not only distinguished himself in sports, but has also performed brilliantly in academics. It is my sincere hope that Kwan Hang will continue to excel and bring honour to Hong Kong in the future!”

Wong Kwan Hang graduated from the Department of Computer Science and Engineering (Class of 2017) and received a Postgraduate Diploma in Education. He was diagnosed with spinal muscular atrophy at a young age, and began his life in a wheelchair. Nonetheless, he never gave up on himself. In the hope of mitigating his health conditions, he began playing boccia starting in secondary school to train his muscles.

Since the beginning of his 13-year boccia journey, Wong Kwan Hang has continued to achieve outstanding results. In 2009, he clinched gold in his very first match in Asian Youth Para Games BC4 Pairs. After that, he won individual championships in BISFed Boccia World Open Sevilla and Bangkok 2017, and double golds in Asia-Oceania Bocce Championships 2017 and 2019. His team was elected “Sports Team of the Year” in 2014 Hong Kong Sports Stars Awards.