Professors Wong Tien-Tsin and Heng Pheng-Ann of the Department of Computer Science and Engineering, CUHK have received the Multimedia Prize Paper Award given by the IEEE Transactions on Multimedia. The Multimedia Prize Paper Award is an annual award for an original paper in the field of multimedia published in the IEEE Transactions on Multimedia in the previous three calendar years. An award may not be given if a paper of high quality is not uncovered. It is highly commendable that professors have receive the award among all the well-written papers.

The award-winning research of the professors solved the problem easily. The research team first pre-computed complex scene lighting configurations and stored the data. As the data required huge storage space and would sometimes even occupy the whole hard-disk, the team compressed the data and the data would undergo real-time decompression during the rendering process. This novel technique can provide greatly help in the production of computer games and computer animations as producers can easily simulate real environments to immerse users in a virtual world.

Prof. Wong Tien-Tsin obtained his Ph.D. degree in Computer Science from the Chinese University of Hong Kong (CUHK) in 1998. In August 1999, he joined the Computer Science & Engineering Department of CUHK. He is currently a professor and a core member of the Virtual Reality, Visualization and Imaging Research Centre in CUHK. He also received this year’s Young Researcher Award from CUHK.

Prof. Heng Pheng-Ann received his B. Sc. degree from the National University of Singapore and furthered his studies in the US. He received his PhD. from the Indiana University of USA in 1992. He is a professor at the Department of Computer Science and Engineering at CUHK. He founded the Virtual Reality, Visualization and Imaging Research Centre at CUHK in 1999 and has served as the Director of the centre since then. 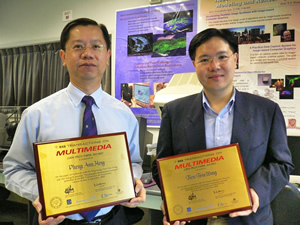