Congratulations to Mr. NG Chak Sing, a M.Phil. student supervised by Prof. Terrence Mak, won the Best Paper Award in the 23rd Euromicro International Conference on Parallel, Distributed and Network-based Processing (PDP2015). The paper entitled “DeFrag: Defragmentation for Efficient Runtime Resource Allocation in NoC-based Many-core Systems”. This conference has received 239 submissions from 54 countries, which are record numbers. On average each paper received 3.5 reviews. The result was the selection of 68 regular papers for publication in these proceedings: the overall acceptance rate of full papers in the PDP 2015 is 28%, 31% including special sessions.

Abstract
Efficient runtime resource allocation is critical to the overall performance and energy consumption of many-core systems. However, due to the applications’ unknown arrival and departure time under dynamic workloads, the runtime system resource management is challenging. The frequent allocations and deallocations of the applications might leave on-chip free cores scattered due to the lack of design-time knowledge of their finishing time. This situation is referred to as fragmentation. In order to optimize the performance and energy consumption of the system in such situations, in this paper, we propose a runtime defragmentation approach that collects and reshapes the scattered cores in close proximity. We also propose a fragmentation metric which is able to evaluate the scatteredness of the free cores. Based on this, the proposed algorithm will be executed to bring the scattered free cores together when the metric is over a certain predefined threshold. In this way, the contiguous free core region is formed to facilitate efficient mapping of the incoming applications. Moreover, the proposed algorithm is also aware of the existing applications and minimizes their performance impact. Experimental results demonstrated that the proposed defragmentation approach reduces the overall execution time and energy consumption by 42% and 41%, respectively when compared to some of the existing approaches. Moreover, a negligible overhead, accounting for only less than 2.6% of the overall execution time, is required for the defragmentation process. 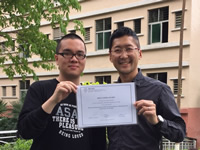 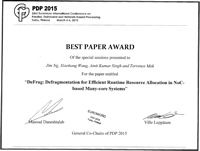