The following article is originally published in Engineering Faculty Media Releases on 9 October 2020. 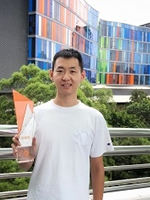 Hao XU, a PhD student from the Department of Computer Science and Engineering at CUHK, and his teammates designed an artificial intelligence (AI) system that can automatically generate a mini-figure brick model in the DeeCamp 2020, winning them the championship against 37 teams from all over the world.

The DeeCamp, which has attracted over 20,000 applications from over 1,000 higher institutions in the past three years, is a programme aiming to inspire top AI talent from all over the world. There were more than 200 participants in the DeeCamp 2020. They were lectured by 12 world-renowned artificial intelligence experts including Andrew NG, Zhihua ZHOU and Kai-fu LEE, Chairman and CEO of the Sinovation Ventures. For the competition session, participants were separated into 37 teams to develop projects that use AI to solve real-world problems in five different fields, including medicine, business, autonomous vehicle, education, and innovation.

Hao XU’s team members came from Tsinghua University, Beihang University and IST Austria. XU himself studies the computational design of assembly blocks at CUHK under the supervision of Professor Chi-wing FU from the Department of Computer Science and Engineering. Prof. FU and Hao XU have developed a sophisticated computational algorithm that can fully automatically compute and construct LEGO Technic designs, the first of its kind in the world.

After multiple selections, Hao XU’s team became a dual champion and received a prize of 100,000 RMB. The panel of judges praised their innovation which combined building blocks with AI, and mentioned that their products created a strong desire to buy, and that this was a project that can be more or less directly financed. The team now plans to commercialise their automatic building block generation algorithm by the end of this year. 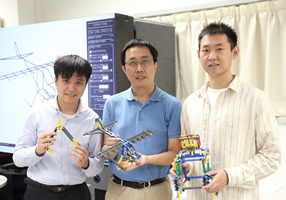