The ASC Student Supercomputer Challenge, which began and is organized in China since 2013 and supported by relative experts and institutes in Asian, European and American countries, aims to promote the communication and cultivation of supercomputing talent in various regions and countries. Its goals also include advancing the application and developing ability of supercomputing, driving the scientific and technological force of supercomputers, and promoting scientific and industrial innovation. ASC has become the world’s largest supercomputer contest. This year a total of 152 teams from 135 universities competed from six different continents. 16 teams worldwide qualified for the finals including the CUHK Team, which were held from May 18-22 in China. 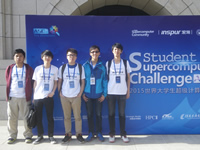