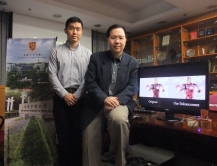 With the wide popularity of 3D movies, more and more filmmakers produce movies in 3D. However, the dynamic range of current display devices is quite limited and can only present a much smaller range of intensity as compared with our daily visual experiences. Although the fast-growing HDR (High dynamic range) technology can preserve richer content of images, current display technology lacks the ability to accurately show HDR outputs.

To tackle the problem, Prof. WONG Tien Tsin, Department of Computer Science and Engineering, CUHK, and his team has recently developed an innovative technology called ‘Binocular Tone Mapping’. By utilizing the binocular fusion property of human vision system and the increasingly popular stereoscopic devices, the new technology offers users a low-cost and comfortable way to simultaneously perceive both the high contrast as well as the rich texture details at both dark and bright regions, so as to gain an enriched visual experience.

Similar to two independent visual receptors, human’s two eyes are able to tolerate certain degree of differences between our left and right views, e.g. disparity, differences in color, contrast, and even fine content. Our brain can naturally fuse the differences from both views, without awareness of such differences. The CUHK research team is the first to make use of this human vision phenomenon to develop ‘Binocular Tone Mapping’.

The ‘Binocular Tone Mapping’ technology can combine with existing stereoscopic (disparity based) movies without hurting the existing stereoscopic experience. It also virtually compensates the luminance attenuation due to the wearing of 3D glasses. The technology can be generally applied to 3D movie production, 3D games, 3D visualization as well as other digital visual entertainment applications. Users can watch images with high-quality visual effects by common 3D display devices. Comparing to the HDR technology which need the setup of expensive equipment, ‘Binocular Tone Mapping’ technology has a wider range of applications with a lower cost.

Via an optimization process, the new technology synthesizes a pair of images, one exhibits high contrast, while the other preserves the fine details. With a pair of 3D glasses and a 3D display device, a user can simultaneously visualize the image pair. These images are optimally synthesized in a way such that the user’s brain can naturally fuse the two views, and perceive more visual content than any single image can offer. The dark and bright regions of the image, including rich color and texture details, can be shown clearly. The image perceived will be closer to the scene viewed by human eyes.

Based on the binocular fusion property of human vision system, the larger the difference between the two images, the more details of the images can be seen by a user. However, there is a limit on the image difference. Exceeding such limit may lead to the visual discomfort. This technology can maximize the difference between the two images to the extent that is acceptable to human vision, and therefore allows users to watch the images in a more comfortable way.

ommon images can show the highest contrast between brightness and darkness, but not the details of the bright and dark regions. 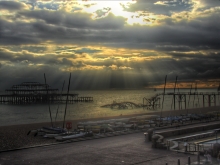 An HDR image is synthesized by the brightest and darkest images. It can show the detailed content but the contrast between the brightness and darkness is greatly reduced.

A pair of images synthesized by ‘Binocular Tone Mapping’ technology, the right one exhibits high contrast between the brightness and darkness, while the left one preserves the fine details of the bright and dark regions. When using 3D display device, users can watch 3D images with richer visual content.